Using the Pandemic to Your Advantage 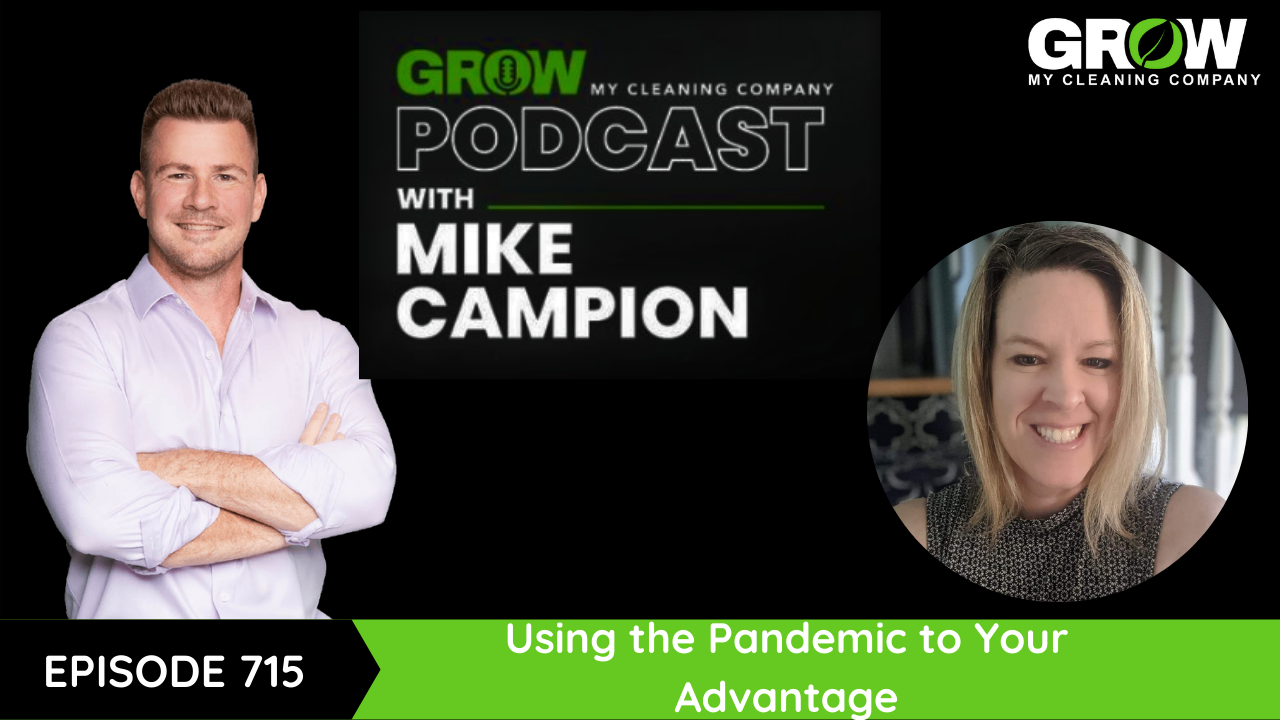 Episode 715 – Using the Pandemic to Your Advantage

Hi Cleaning Nation! Today on the podcast, we have Patti Searle. Patti has been in business since 2014 and worked part time while growing her business. She took a unique approach on her niche and has focused mostly on military, police and high security industries that call for high level, extremely trustworthy cleaning. She was growing a team and doing very well until, like so many of us, the pandemic hit and her employees quit in favor of unemployment. LIsten is as she talks to Mike about her predicament, her mindset, and what she can do to get on track. I’m sure many of you will relate to the way she is feeling and find a lot of help in this podcast!

Without that shift in mindset, it’s very rare (I’d venture to say impossible) that a single person can scale and build what is currently a job into a viable, growing business.

This often happens because we have a protection mechanism. And until we stop telling ourselves the stories about why things are the way that they are or how they used to be better, we are left spinning.

First we have to be clear on whether or not we are up for the challenge of owning a business. That means that headache of stepping out of the cleaning, the trust of letting someone else take over, the relinquishing of control as others fill in responsibilities you once had. And if that sounds like it’s not worth it to you, you’d rather just clean, take home and the money and it’s something you genuinely enjoy, then stay. If not, you just have to have an honest conversation with yourself about what you want and what you are willing to do to get it.

As an analogy, there is something called learned helplessness. You can put a puppy in a low fenced area and he’ll learn he can’t jump that fence. If he stays there until he’s grown, he won’t even try to jump over when he’s older. It’s not because he doesn’t have the ability to, he doesn’t have the belief that he can.

Hiring for More Than Money

If you’ve been around for very long, you probably know what’s coming. In order to hire dependable, loyal employees who are willing to work together in a happy, supportive culture, you have to have a core value match. That means when you are looking for people to hire, they have to care about the same things as you. If you can find that match, all of the rest of it becomes less valuable. ANd though it may not seem like it, unemployment might even be on your side in this one. Most people who would rather stay home (ie. those not getting jobs because they’re on unemployment) than contribute to the world in some way probably aren’t going to be a core value match for you anyway. So some of the weeding out has already been done for you.

To sum it up, focus first on your mindset and beliefs, practice core value based hiring not solely based on money and put a system and process that works that’s scalable.