The Top Three Questions We Get Most Often From Clients and Our Answers : Episode 735 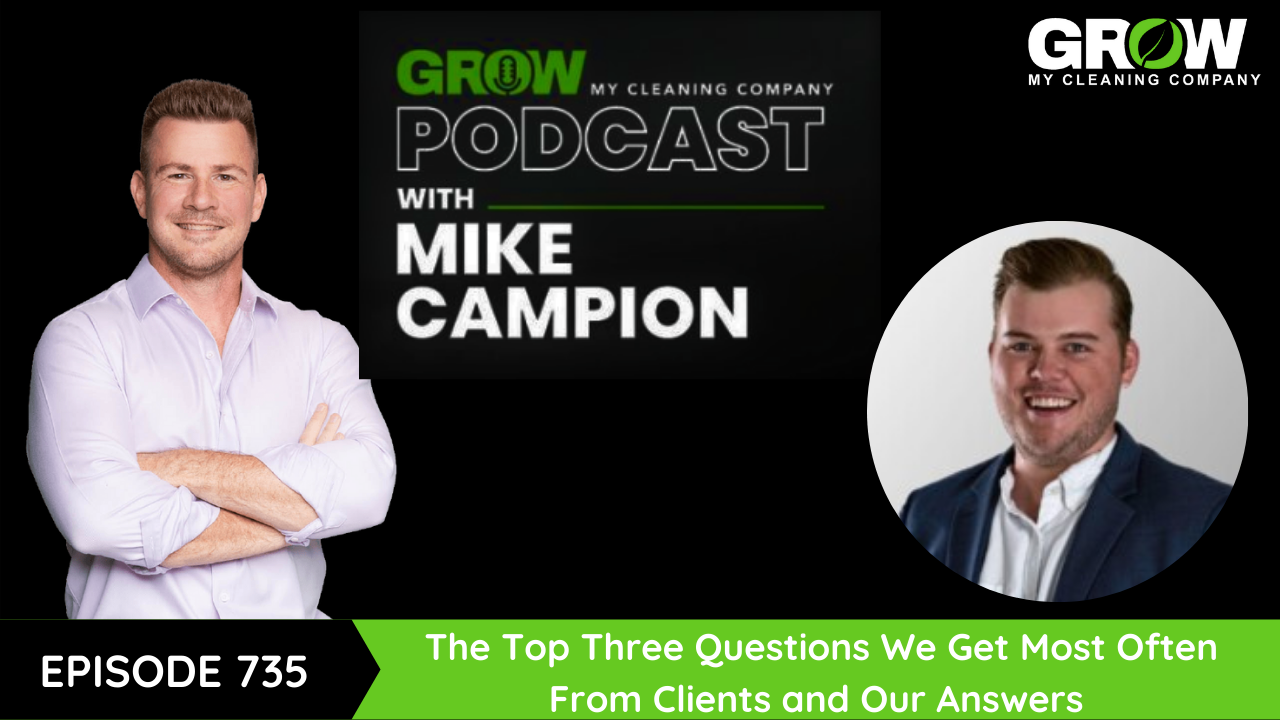 Hey Cleaning Nation! Today on the podcast, we have our own in house marketing wizard Jackson. This guy knows his stuff when it comes to paid traffic and is really involved in helping our clients with theirs. Because Jackson spends so much time with our clients, he will often get asked the same question or a version of the same question over and over again. So today, we are having Jackson answer some of his FAQ right here on the podcast to give you all a leg up on what so many people who come to us want to know. Listen in as he tells you some nuggets he’s learned over years of helping our own clients.

Zoom Out When It Comes to Data

One of the things Jackson sees over and over again is clients stressing over some data that is very myopic. Meaning they zoom in and focus on how their ads are looking over the past day or two, rather than over the past month or two. This can add a lot of unnecessary stress and the numbers don’t even reflect a drop in growth. If you have a really good day followed by two bad days, your numbers may dip but the truth is overall you’re likely going steadily up. If you make adjustments according to a couple of days, you’ll likely spend more ad money because it’ll be harder for the algorithm to catch up with what you’re doing. Zooming out will allow you to get a better picture of what’s really going on long term rather than just for the past two or so days.

Focus on One Thing at a Time

Often, people will come to Jackson and tell him that they have tons of things that aren’t working in their company, and they want to fix them all right now. That’s a recipe for overwhelm and shoddy work in all areas. Instead, if you can set your goals around your biggest priorities and focus on just one of those at a time, you are going to be able to give more quality and value to that thing and are more likely to make it work well. And really, all things in a business that need to be accomplished fall into one of three categories- business development, employees, and clients. So figure out which category each thing on your list needs to go into and then choose one of the things in that category and give it your full attention. The results will surprise you and you’ll be likely to get to the next thing on your list much more quickly.

Be Ok With Crappy Version 1.0

If you’ve been around here for awhile, you’ll know that Mike is always preaching that rather than taking lots of time and effort putting something out into the world, just put out a rough draft version. This is what he refers to as crappy 1.0. The idea is that rather than stressing and procrastinating because it isn’t perfect, you can’t get any data until you get something up and see if it’s working. Once you have a basic outline, then you can tweak accordingly so that it works. But if you convince yourself it has to be perfect, you are going to spin in unproductiveness and never get started in the first place. Jackson sees this a lot in clients and gives the same advice to them. It is a starting point. The first step on the ladder, some forward momentum. And just like a snowball, once you get it going, the momentum will often grow until it becomes what you want it to be.

Final Takeaway: Focus on big picture vs small picture, only do one thing at a time, and be ok with a crappy version 1.0.