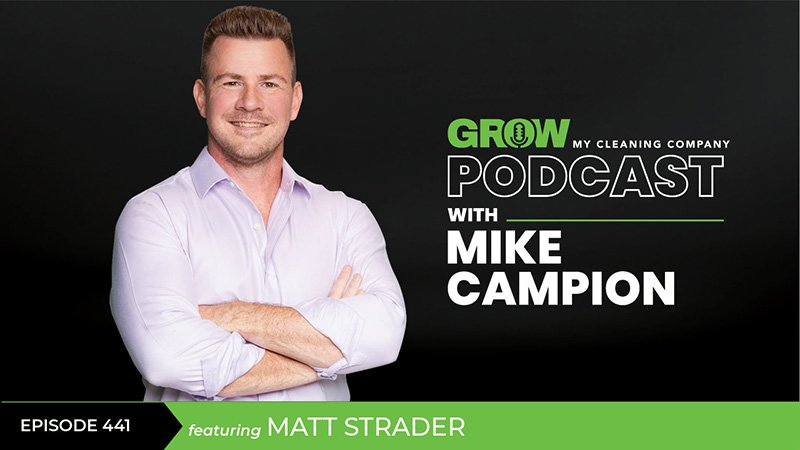 Today Mike is having a special case study episode with Matt Strader, who started his cleaning company in 2007, when the economy was at its worst. Matt had to go door to door at the time just trying to get enough money to keep his business afloat. Today we find out how he took his business from that point to where it is now.

Mike: “Before we got together, what wasn’t working? I promise there are a lot of people out there listening that have been in a similar situation that would really benefit.”

Matt: ‘The short answer is everything. It’s funny to say something like that because the year previous we doubled our revenue. I can look at that metric and say that everything was working, but when I was actually sitting down to work on the business, I was lost. I would put marketing material out with no responses. There were some things that happened within the company contextually that allowed us to grow, but I didn’t change anything. Functionality wise I was struggling every single day. I was at a point before I came to you where I was checked out. I didn’t know what I was doing day to day, and I didn’t feel like I was being effective. I didn’t have a plan- I just threw a bunch of stuff at the wall to see what stuck.”

Mike: “Walk us through us working together and some of the changes that you’ve made.”

Matt: ‘One of the things that I picked up off of you was authenticity- being real. I remember it was like 13 years of my life happened in a second. You said something on the phone and I was taken aback. For so long I was trying to be a “professional” company. And it’s not that I’m not a professional, there was just a bit of fakeness about how professional I was trying to be that was holding me back from being who I really was. I actually was having a conversation with one of my clients earlier today about this, and I just don’t care if I sound goofy or stupid. People are going to judge me either way so I might as well have fun doing it.

Mike: “In the beginning were you trying to be completely professional, or how much of yourself were you really putting in your business?”

Matt: “It honestly all happened so fast, I mean I was your typical marketing content guy that did everything the same way everyone else did. I was reading online all the different things that I should be doing, when I realized that they were all talking about what other cleaning companies were looking for in ads, not the consumer. I remember one of my first calls was someone else’s last, and I remember thinking about how smart the things he was saying were, and then you ragging on him for how bad it used to be, and it really made me realize that it was something I could do.

If you enjoyed this and would like to watch the rest of the video on facebook with the live comments, click here, and if you are still hungry for more, head over to this link and find the most suitable time for you!