Mike on Why Mindset is the Single BIGGEST Indicator for Success: Episode 722 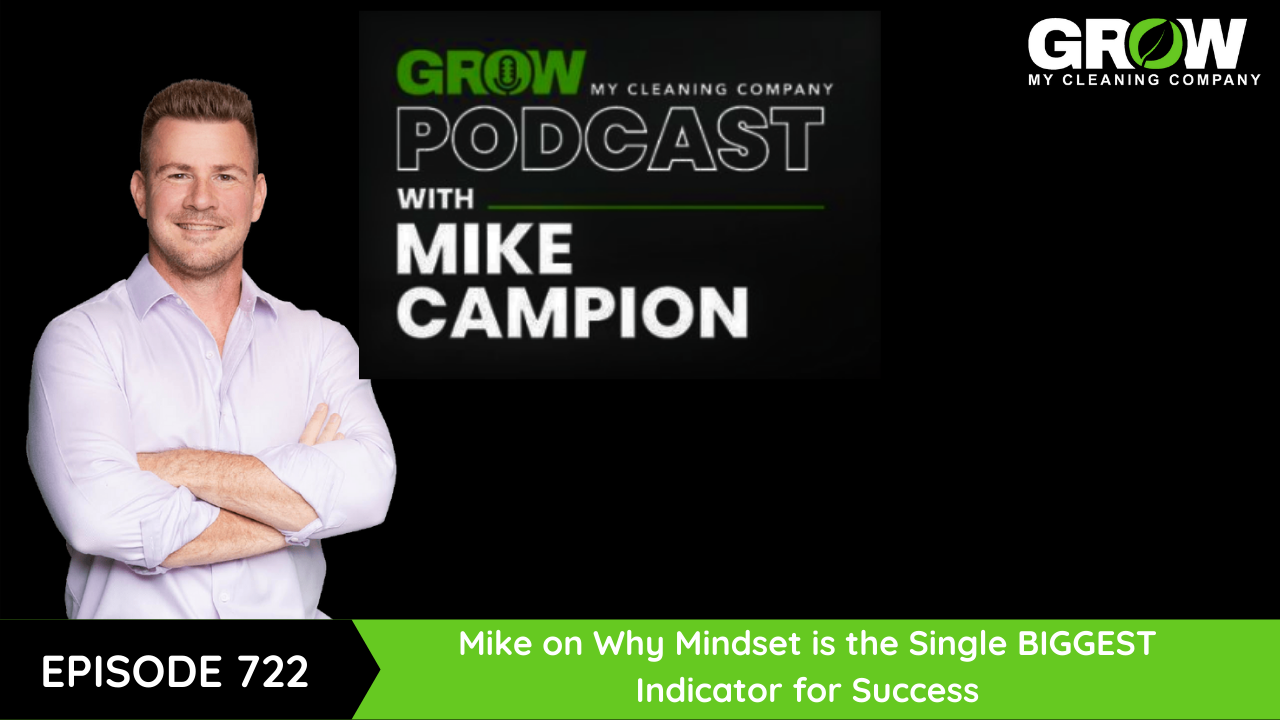 Welcome to the podcast Cleaning Nation! Today on the podcast we have a special treat. No guests, just Mike, one on one talking to you about what he thinks is the single biggest indicator of success. Experience and years of coaching have taught Mike that it doesn’t matter how everything else is going. If a business owner doesn’t have the right mindset that allows them to make clear decisions from the right perspective, their business will never do as well as it could. On the other hand, even if you’re starting from the bottom, the right mindset will get you farther than almost anything else in terms of being able to climb that latter to where you want to be. Today Mike explains how that’s the case and why this is such an essential concept for you as a business owner to understand.

What You Focus on Grows

An Amazing Story to Illustrate This Concept

Before Mike had this podcast, he had another one. And on that podcast, he had an American drug dealer who got caught dealing drugs in Thailand and put into prison. Thai prisons give their prisoners nothing. Not clothes, not food- or at least not enough to survive. If you don’t have someone to give you those things, you don’t have them. He also didn’t speak the Thai language. So in terms of what he could control, there wasn’t much. So he decided to focus on his sphere of influence, what he could control, which was how he spent his time.

He started to learn the Thai language. Once he could communicate, he started to reach out to lawyers and influential people. He made friends with the guards. Ultimately, he was sent back to the United States to serve his sentence and got released. But that never would have happened had he not focused on his sphere of influence and what he could control.

The second example of what you focus on is what grows would be Covid. Coaching people through the pandemic, Mike has noticed two distinct camps. Those who used covid as an excuse for why their business was going so badly and those who used it as an opportunity. Those who saw the potential in being an essential business in a world that is currently obsessed with cleanliness.

The Stories We Tell Ourselves

In the case of the labor market right now, we tell ourselves the government is paying people to stay how (true), it’s going to be harder to hire people (maybe partially true), I may as well shut things down because I can’t run a business like this (lie).

But what if we changed that story to something more empowering? The government is giving people money to stay home (true), It might be harder to find people to hire (maybe true). But that means that the people actually looking for a job are going to be higher caliber people looking for a purpose and a cause meaning the available pool is better than it’s ever been (maybe true and it gives you way more motivation to build your business back the way you want to).

How we talk to ourselves makes all the difference in terms of our outcome. Focusing on what we can control is how we get the leverage to build what we want, regardless of our circumstances or the external forces outside of us.