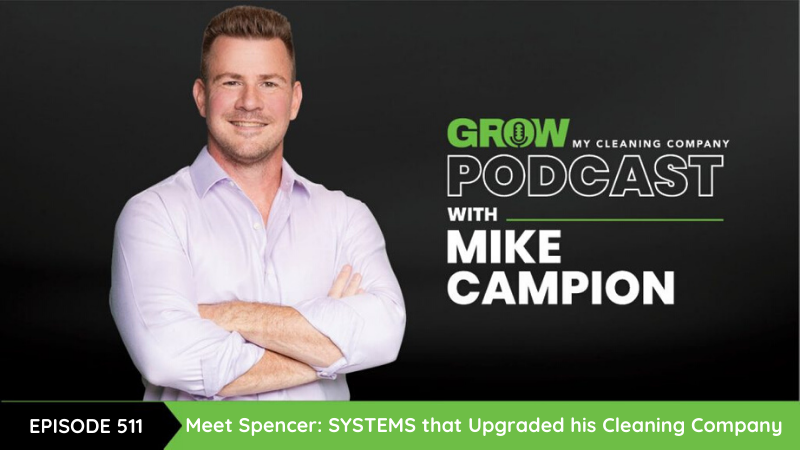 Today we speak with Spencer Ward, a member of Cleaning Nation for years and currently part of the Grow My Cleaning Company Millionaire Mastermind!

A little background about Spencer:

Spencer is lives in the thriving community of Pocatello, Idaho. He has owned Nucleane, a commercial cleaning business, for the past 7 years. The company is spaced out over four cities about 45 minutes apart. Spencer started the business when he was fresh out of college and couldn’t find a job so he decided to get creative and start his own company.

Where his business was at when he started with GMCC:

As of right now, Spencer has about 40 employees with his company, however when he started coaching with Mike and GMCC, he only had about half that amount. His biggest challenge in the beginning was hiring employees and he felt stuck. It was a nightmare to constantly try to find and hire people across four cities. Spencer had no idea about what a hiring funnel was or how to implement it. His old hiring system for Nucleane was when they had gap in employment, he would then go out to find employees. They always waited for the storm to hit them before taking any action.

The cow vs buffalo analogy:

Spencer relates this to a cow vs buffalo analogy. When a storm hits, cows tend to run with the storm and have to therefore deal with the storm longer. Buffalos on the other hand, stay in place, face the storm, and then run into it. They take action against the storm so it’s doesn’t last as long for them and are resilient. Spencer knows that “storms” will always occur in business, but he chooses to be a buffalo and stand strong against the storm. Spencer was handling his hiring problem like a “cow” before he had systems. Now, instead he has for to six potential employees in the “bull pen” ready to jump in when needed. He keeps these contacts warm until Nucleane grows or people quit. This hiring problem was something that used to eat up so much of his time but now Spencer has a hiring system, so he doesn’t even think of this as a problem anymore.

Nowadays, everything is automated for Nucleane’s hiring process: recurring group interviews are set up and Spencer uses Calendly for people to automatically book interviews. Generally, 12-15 people show up per group interview, and depending on Nucleane’s need, he can pay more or less money on advertising to keep the hiring funnel full. This allows Nucleane to only have to accept who they really like and they are no longer desperate to fill positions or suffering from “warm body” syndrome. Spencer has found that if he consistently has group interviews every week, it keeps him in the driver’s seat. Then he doesn’t have to be afraid to fire people that aren’t a match to Nucleane’s core values or doing bad jobs.