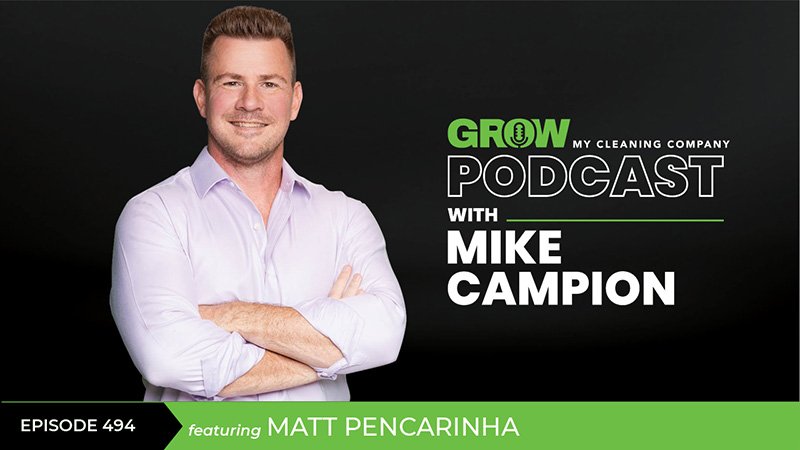 Today we have a special guest, Matt Pencarinha, an alumni of the Clean Profit Program from 2018. Matt recently emailed Mike updating him that in 2019, he took his new commercial cleaning business from ground zero to $557k/year 12 months.

Let’s Start a Ways Back with Matt Before GMCC

Once Matt graduated from college, he took on a cleaning job at a small cleaning company. Unfortunately after three months, the owner pulled the plug on the operation since he was not good at running it. Matt observed how NOT to run a cleaning company first hand at this point. The owner DID however, allow Matt to take a few of his accounts so Matt could start his own business. Matt ended up selling the business in 2016 ironically, BEFORE he met Mike and Grow My Cleaning Company.

Shortly after selling that first cleaning business in 2016, Matt then found Mike and GMCC. Matt took a break from the cleaning world and travelled for a bit and spent time with his family. He then moved with his family to their current city of Asheville, NC where he didn’t know anyone. At this point, he decided he wanted to start a new cleaning business and start it again the right way with the proper systems in place. He immediately though of Mike and GMCC and reached out in September of 2018.

A Challenge from Mike

When Matt started the program, he actually had an opportunity to buy a house cleaning company. Mike advised Matt, based on his goals, to not buy that particular company, but instead challenged Matt to start a brand new company of his own. Matt was terrified at the thought of starting from ground zero. He had never been at ground zero completely before. The company he was going to buy was grossing $430k in revenue per year and Matt would have had to pay over $300k for it, and on top of that, Matt would have had to go all in to purchase it. Interestingly enough, that company was making around $3500/month BUT by starting his own company, Matt managed to go to $4700/month.

So How Did Matt Do It?

Matt decided to focus on the commercial side of the business, specifically in medical. As he got the business up and running and implemented systems, he soon learned that he needed to invest 15-20 hours a week in actual work in the business to keep the business’s heart beating. He worked for 4 months in the business cleaning and running it until they landed their first $50k/year contract. One of the systems he set up right away was group interviews, so he had plenty of people to call when he started landing these large contracts. The rest of the time he worked hard on networking and building relationships with potential clients and other things like training systems for the employees. He made sure to network specifically with the medical industry and did a lot of footwork researching his market to use the right words to market to them. Three months after he landed the first $50k/year contracts, he was completely out of the cleaning part of working in the business, with rare emergencies.