How to Serve with Purpose in Your Cleaning Business: Episode 611 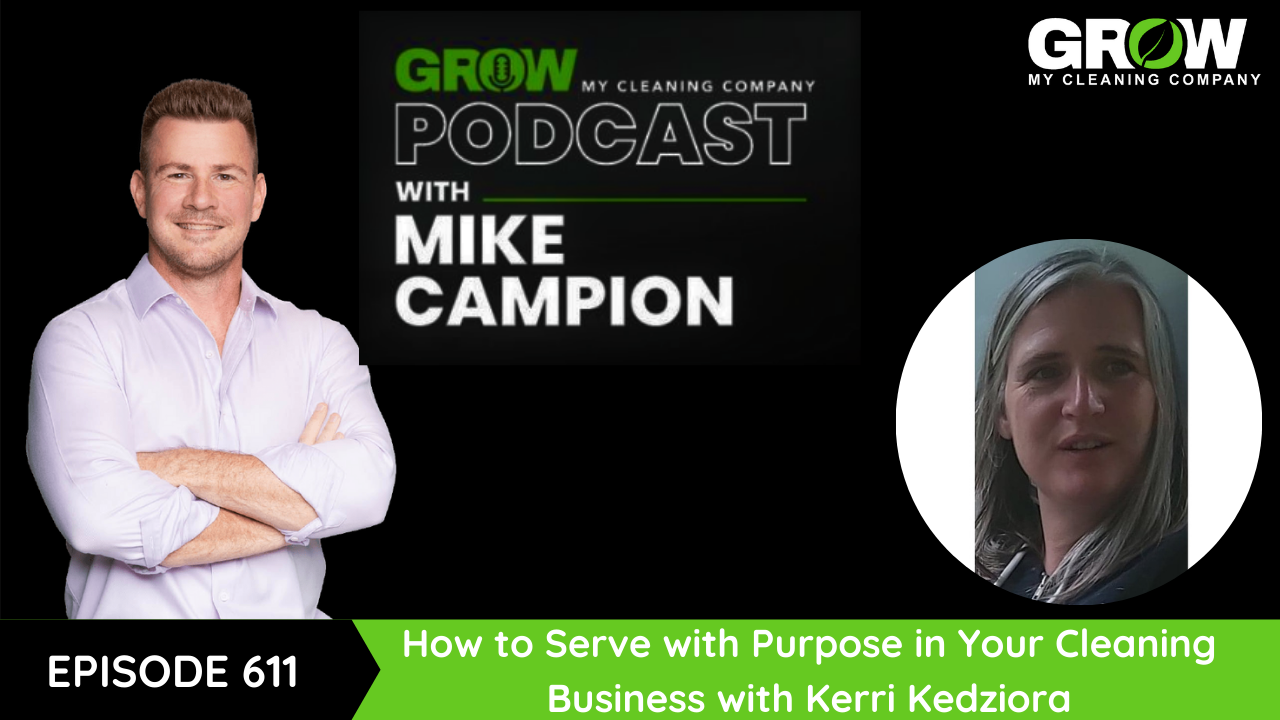 Episode 611 – How to Serve with Purpose in Your Cleaning Business

MIKE: Hey Cleaning Nation! So excited to introduce you to one of my favorite people, Kerri Kedziora. She is part of our Next Level Program and started KAP Cleaners all by herself in 2017. She started as a one-woman show and now has a team of 20 people! I love having successful minds on this podcast so they can share their tips with all of you! So first of all, how did you go from cleaning to owning your own cleaning business?

KERRI: I’ve been cleaning since I was seven years old. I had a single father and I was the oldest daughter so I had to pick up the slack. I started working at a fleabag hotel at fourteen. By the time I was in my twenties, my mother-in-law started teaching me about this type of business so I could take over her company. Unfortunately, that marriage failed and she took the offer off of the table. Even though that fell through I used cleaning as a side gig because it was something I always seemed to excel at. Eventually, cleaning took over and then I quit my job.

MIKE: How did you make the transition from having a good job to cleaning full time?

KERRI: To be honest I was bringing in some good money but I was being treated horribly. I knew that by owning my own business I would be valued more. My big goal with this was to be able to hire employees and treat them well.

MIKE: I don’t want Cleaning Nation to miss what you said, which was that you left a good-paying job for a less paying job because you were being treated so horribly. People will work for less money with a good culture because they want to feel valued. You always want to pay your workers fairly but high pay without a good culture is worthless. Fair pay with a good culture can change the world. When did you make the shift from “worker bee” to the owner?

KERRI: During COVID I was so frustrated and overwhelmed with the client attraction I was getting. I came to a point where I either had to change what I was doing or quit but quitting wasn’t an option. I had been following you for a year and finally took the jump to get on a call with a coach. He believed in my dreams so much that I just decided right there that I was going sign up. Since signing up my whole life has changed. I have achieved such freedom that I am getting to start working with women who have left abusive situations. This has been a dream of mine for so long.

MIKE: I am bursting with pride right now. When you say serving other women are you talking about charitable cleaning or hiring them on your team?

KERRI: Hiring them and empowering them.

MIKE: When I was young and 22 I was like “Finally, I get to be boss and they will have to do what I say!”. This was young Mike and I am a lot more grown-up and smarter now. Do you guys hear what Kerri said? She said, “I can’t wait to serve these women”. That servant leader position of wanting to make their life better and not hiring them to just make her life better is a game-changer.

KERRI: Yes and I feel like I am finally where I am supposed to be and I am reaching my purpose. We are doing things now that a year ago, I wouldn’t have even been able to dream of.

MIKE: What would you say to everyone out there that is thinking “Kerri is a magical unicorn and I could never do that?”

KERRI: I don’t have anything that they don’t have. What I did was I took your course and followed everything to a tee! It changed my mental state and I started realizing that life was changing. Only six months later my company has COMPLETELY transformed. The only thing I regret is not starting sooner.

MIKE: I love what you said about making a decision because that decision is what made you so dedicated and ready for this program. For people who aren’t ready for the program, what are the top three things you learned that helped you grow your company?

KERRI: The first thing I did was change my process of hiring. I stopped taking just anyone and started hiring people with my core values. Then I started making rules for clients. I needed to make sure I and my employees were being valued. Lastly, I changed my mindset so I never stopped going.