How to Maximize your Advertising Budget: Episode 081: Mike Campion LIVE 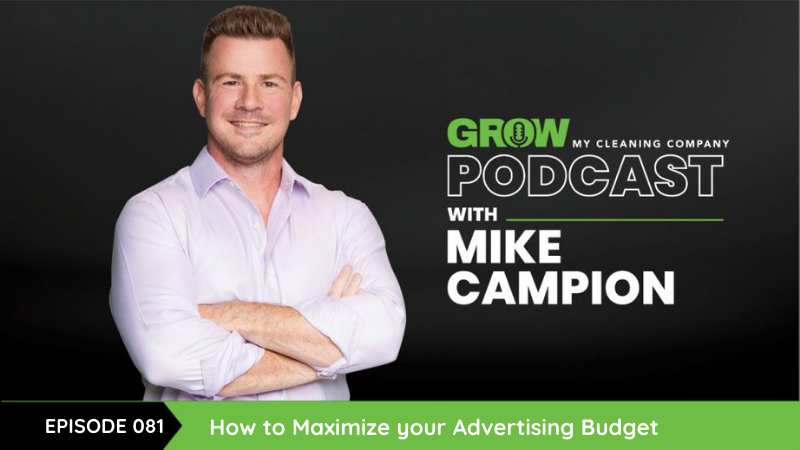 Episode 081 – How to Maximize your Advertising Budget

Let’s start with some hard truths “YOU HAVE TO SPEND MONEY IN ORDER TO MAKE MONEY” — This is a very old saying for a reason – it’s almost universally true. This applies not only to personal wealth but also your cleaning business’ financial well-being.

FOUNDATIONAL IDEAS THAT YOU NEED: If something didn’t work for you, that doesn’t mean that you should be afraid to try more or try the rest. As the saying of Denis Waitley goes, “Failure should be our teacher, not our undertaker. Failure is delay, not defeat. It is a temporary detour, not a dead end. Failure is something we can avoid only by saying nothing, doing nothing, and being nothing.”

So in short, have a mindset like this: Failure is a GIFT. Failure is giving you and your business an another chance to do something, and this same failure reminds you that don’t be an idiot, and do it better this time from what you’ve learned.

Because after all, IF SOMETHING DIDN’T WORK THE FIRST TIME, IT DOESN’T MEAN IT WON’T WORK ON THE 2ND, 3RD, 4TH, 5TH, NTH.

Don’t believe me? I know in some part of your life, when your internet router doesn’t work, YOU HAVE TRIED TURNING IT OFF AND ON RIGHT? And it worked? Or maybe not? Then you tried it again? Then it worked? Right?

Same on your Cleaning Business, YOU SHOULD NEVER LOSE HOPE.

We know that not all cleaning business owners do have the luxury to execute several high-dollar ad campaigns at once to see which is most effective. But that’s not to say that they shouldn’t experiment. With today’s variety in advertising methods, it is surprisingly easy to spend smaller amounts of your advertising budget across a wider variety of channels and receive tangible and surgically-accurate data as to the effectiveness of the spends.

A piece of advice: You may fail, but with that failure, you’ll succeed.

FUN FACTS: Here are some products that failed before attaining success:

Dyson Vacuums: Currently, Dyson is one of the top-selling vacuums of all time. However, founder James Dyson’s road to the top was lined with failure. He tested 5,271 prototypes before finally found a vacuum that worked – but even then, he couldn’t find an American or European company to license and manufacture his product. As a result, in 1993, he created his own manufacturing operation. Just two years later, Dyson vacuums were a worldwide sensation, demonstrating that it pays to never give up.

Bubble Wrap: Engineers Marc Chavannes and Al Fielding created bubble wrap in 1960 in an attempt to create a trendy new textured wallpaper. This was a total failure. The wrap was eventually used by IBM to package a newly launched computer during transport, it suddenly became an overnight success.
Nintendo: Nintendo’s first offering, the Famicom console, had to be recalled after only a few months. Nintendo NES barely sold when it was introduced in 1985. By the end of 1986, however, two little characters named Mario and Luigi had changed the history of American gaming forever.