How Roger Turner Took His Cleaning Business to the NEXT LEVEL: Episode 542: Mike Campion LIVE 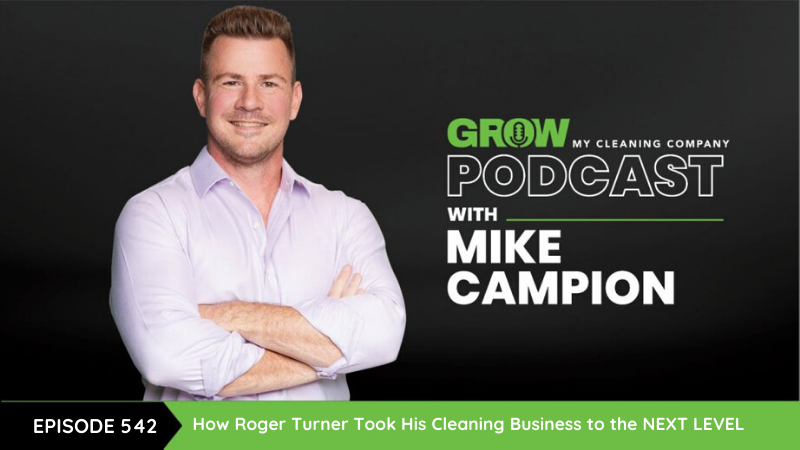 Today we share Roger Turner’s story. Roger is a Clean Profit Elite graduate and current member of the Grow My Cleaning Company Next Level group.

Growing but with One HUGE Issue:

THINKING about it Wrong:

It finally dawned on Roger after hearing some of Mike’s coaching and podcasts, that he had been thinking about his business approach all wrong. Instead of nitty gritty details in the business, it was the overall SYSTEMS and business model that wasn’t working for him. To Roger’s own benefit, he is a very coachable mentee, so he was able to change his outlook quickly once he was in the Clean Profit Program.

Roger is currently still working his full time job in addition to running his cleaning company, however he has plans to leave his full time job to focus on HIS business. In January, Roger had zero employees and now he already has seven full time employees. He is in the process of getting rid of all his subcontractors to switch over to all employees- something he never thought he’d do! He is at least 50% of the way there to quitting his full time job since getting the employees onboard. Furthermore, after making this switch to employees, his overhead is way lower. His cost of goods sold (COGS) went down from 85% to 55%!

From the beginning of his coaching, Mike advised Roger to get rid of his subcontractors, but Roger was very hesitant. It wasn’t something he was keen on doing. Mariana, the GMCC mindset coach, convinced Roer over a few coaching sessions that it was necessary and showed him the numbers on how it could change his business. However, Roger took this to mean that all he had to do was put employees in NEW accounts to grow it. In their next conversation, Mariana wondered why he doubled and tripled sales goals when he could have just changed his current accounts over to employees instead of subcontractors. After looking at his numbers again, Roger realized he was already so close to his goal. HE loves the fact that Mike has Mariana in place because she helped him work through all his fears of having employees.

Connection to everyone in the community is Roger’s favorite part of the Grow My Cleaning Company experience. He loves to be able to bounce ideas off of his colleagues in the group. For example, a colleague made a comment in their Facebook group of where to find foggers, which helped Roger to get an idea to be able to find everything he needed right in his area. Just that tip was so profitable to Roger. Talking to other people doing the same thing is so helpful to him, and he can in turn bring even more value to his current and new customers. So with just one little comment from another member, Roger had a great idea on how to grow his company and better serve his customers.