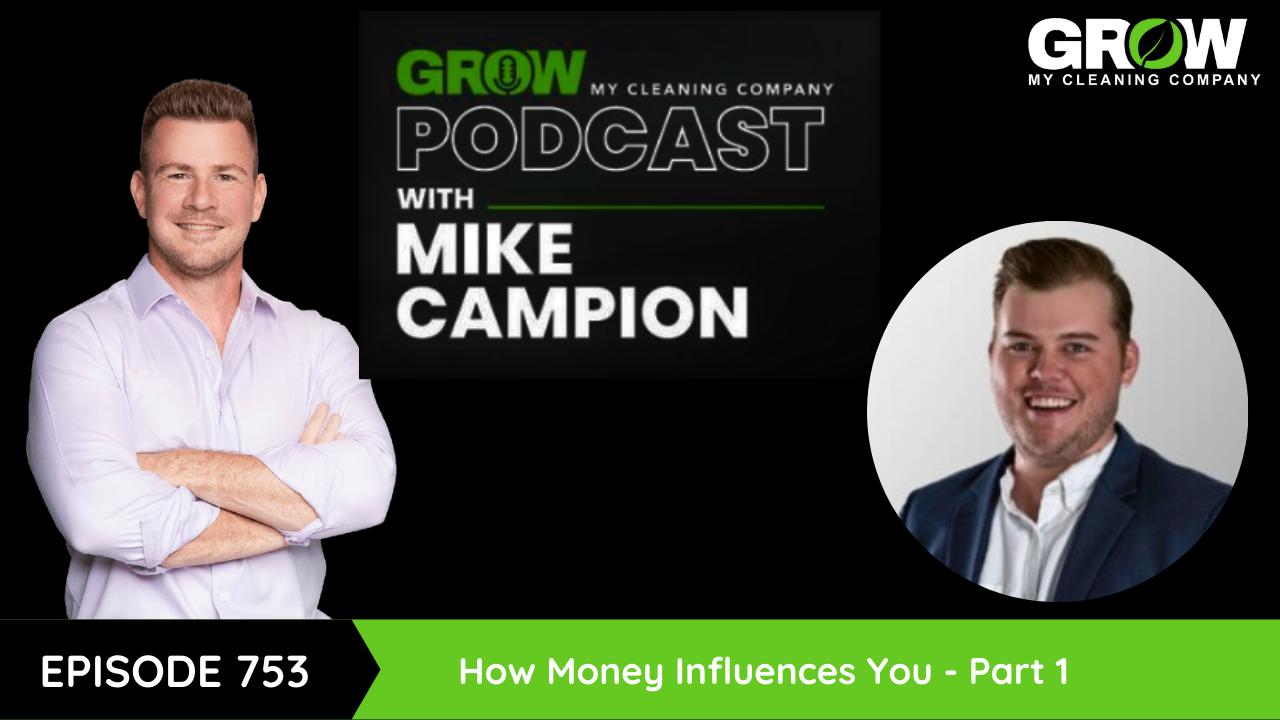 Hello Cleaning Nation! Today’s podcast is a little different than most but one that has a ton of value. Today, we are talking about money! For so many of us, the goal is always money. But why? And where does the time/money balance come in and what are we really trying to accomplish by having money anyway? Listen in and Mike and Jackson-one of our in-house marketing gurus-talk money. How to make it work for you and be in control of it rather than the other way around.

For Mike, he knew he was starting to feel comfortable with his money when he was willing to pay over a dollar at Taco Bell. Then, it was not paying super close attention to the menu at Olive Garden. Before long, he was to the point where it wasn’t worth his TIME to drive around looking for the cheapest gas in town. It was the same when he decided to hire someone to take care of his pool. His time became more valuable than his money. But that threshold is different for everyone. For Jackson, he decided to hire a house cleaner simply because he didn’t want to take the time out of his busy day to clean after working all day. He admits it maybe isn’t even the best financial decision for him at this point, but he likes the peace of mind it brings by taking that off of his plate. There’s no right or wrong answer here, it’s just making the decisions you feel best about and using your money in a way that feels right to you.

Keeping Money Has More to Do With Mindset Than Profit

When it comes to keeping your money you work so hard to spend, so much of this comes down to how you think about your money. It’s those people who spend what they make that will never have money, no matter what their take-home pay is. There is a really interesting book called “The Millionaire Next Door” and specifically the sequel called “Millionaire Mindset” that researched how people with ten million dollars or more lived. And in this study, they wanted to set up a meeting where these wealthy people would feel comfortable. So they got the nicest wine, the best caviare, etc. and when the first guy arrived, they offered him some of this fancy wine as asked if he like this brand. His answer was-’I drink two kinds of alcohol-bud and free.’ They realized that the reason these people had as much money as they did is because of the mindset they had around being conscientious with their money no matter how much they had.

Money Doesn’t Need to Change You

Just because you start to earn more money doesn’t mean that you have to be a different person. Even the richest people in the world are still at the end of the day just people. But a lot of that has to do with mindset because you can definitely LET it change you if you get too caught up in what having a lot of money should or could mean. If you are really clear on who you are before the money, having it won’t change too much. And that can be a really good thing.

Final Takeaway: Your mindset has a lot to do with how to effectively create and keep money in your life.