How Lacey went from Cleaning (at 9 Months Pregnant!) to Working ON her Business: Episode 688 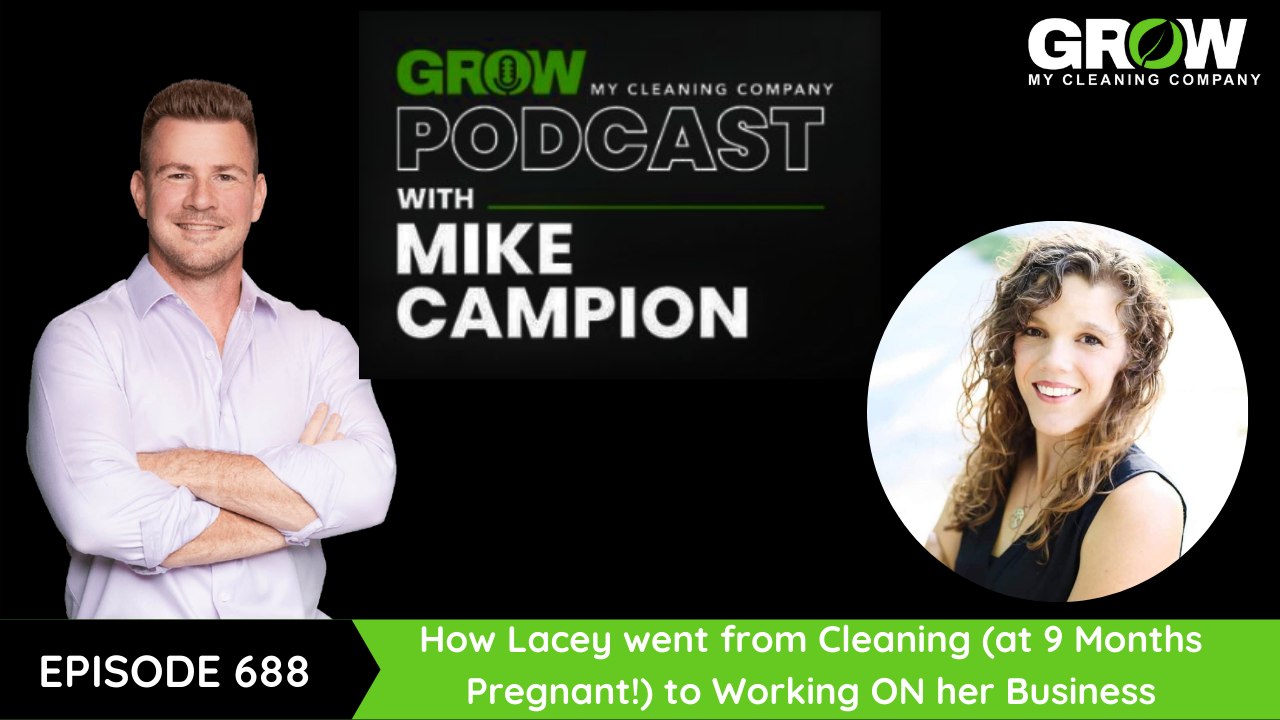 Episode 688 – How Lacey went from Cleaning (at 9 Months Pregnant!) to Working ON her Business

Today our guest is Lacey Heinz. She started Luxury Home Cleaning in June 2018 in Perry, Iowa. When Lacey started her cleaning business, her husband Joshua had a job that he did not love. Now he is full-time with Lacey and the company. This allows them to spend more time with their three kids. They just graduated from the Grow My Cleaning Company Elite program and Lacey is here today to share her experiences and takeaways to our thousands of viewers.

Lacey was nearly nine months pregnant at that time and still on the job cleaning. She was stepping back and mainly training, but she was still on the job every day trying to get her team to take over. She was at the point that she realized she didn’t feel comfortable letting her business go into these people’s hands, and she didn’t think she was going to be able to have maternity leave.

She thought about having some time to figure things out. Lacey wanted her team to be strong and able to take good care of her clients. She wanted to be at the level where she would not even not have to deal with all the problems and calls throughout the day. All Lacey wanted was to be able to stay at home and enjoy her newborn baby.

Lacey’s Journey and Growth Through the Elite Program

While Lacey and Joshua were in the Elite program, the two cleaners that she had been training both quit. She had to hire new people immediately and was so glad to have a hiring funnel system in place to solve her problem.

Even though Lacey’s been in the business for almost three years, she still has to wear different hats in her company. She felt that she didn’t ever get anything done completely. She still had to hire people for example. But having a system to follow that got the right people in place, and had the same core values, instead of just somebody that needed a job, made a huge difference.

Lacey said: “It’s a huge difference when you have people that are a match for you that have the same values as you do. They take out a lot of the things that I was dealing with. That’s been the biggest thing for Lacey. “It’s like, I’m starting to see the very beginning of the vision that I had for this company.”

Also, through the Elite program Lacey figured out how she could raise her prices.

“I definitely say… start internally and know your worth and have what really helped me is doing visualization and having a motto that I go by that I am attracting all the right people. I’m putting the right people in place, and we’re serving at the highest level, spreading joy through cleaning.”

Lacey went from just hiring the best she could and not understanding when people acted crazy, to getting crystal clear on what her values were. This made her realize what she required from her employees and then being able to see right away if they were a fit. This worked better for Lacey as opposed to hiring a person, then the new employee doing something crazy and then having to fire the person.

Whether it’s reaching out to get help from Grow My Cleaning Company or anyone else or just anything in your life, don’t wait until the last minute when the pain is unbearable. It’s just a bunch of additional stress that you don’t need!