Ashley & Avery’s ONE THING that changed EVERYTHING in their cleaning company: Episode 535: Mike Campion LIVE 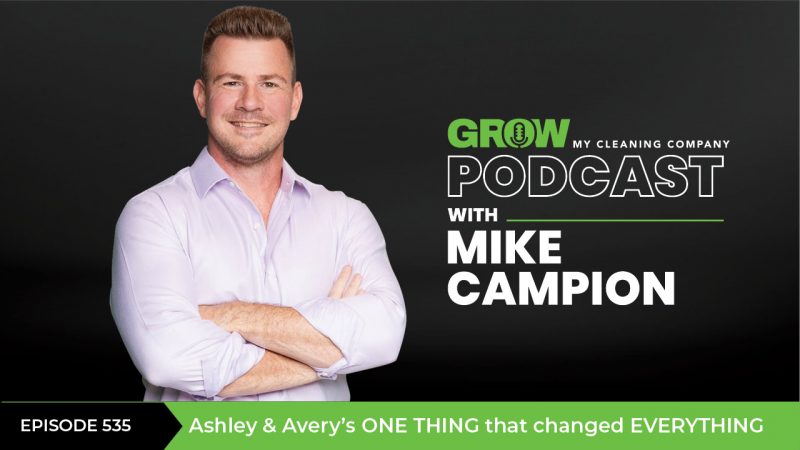 In this episode we interview Ashely and Avery Whaley, founders of More Free Time Cleaning based out of Portland, OR. This couple kicked butt in the Clean Profit Program Elite Group and are now in the Next Level group.

What it looked like before the joined the Clean Profit Program:

According to Avery, prior to meeting Mike they would fly by the seat of their pants. If they needed employees, they would just post an ad but it would always be a day late and a dollar short.

Ashley explains that they have been in business in Portland since 2012. Both she and Avery are huge dreamers and go getters but that caused chaos in their business. They were good at getting customers, they were okay at getting employees, but they didn’t have the proper systems in place. This made the couple feel like they were banging their heads against a wall.  Over the last 5-6 months, their business has become so much more peaceful. They also really know their niche now. They used to say YES to everything. Now they know who they want to serve and who their ideal client is!

Avery describes how in 2012 they were really focused on customers. They would take anything and everything, from post construction jobs to move in/outs. Backing up to even earlier in the company’s history, Ashley describes how she started cleaning. She grew up in MN and cleaned when she was 19 after she received her associates degree while also working in real estate. She had a successful business, and hired her friends to help out. However, tt was already chaotic even back then. Ashley met Avery when he was in the Air Force, and then moved to Las Vegas with Avery, restarting her cleaning company there. The plan though was to move to Portland once Avery was done with his service in the Air Force.  Once in Portland, Ashley started a new cleaning business again. Avery then dropped out of school to help her since she was so busy. According to Ashely, Avery made their company a true legit business when he came in. The couple still had a shared vision of being entrepreneurs. When Avey got more into the business, he got more and more excited about developing systems so they wouldn’t have to think about the day-to-day decisions so much.

Avery actually found Mike 4 or 5 years ago. He was even on the podcast back when it was just Mike doing live coaching. Avery was also part of the original Elite monthly program. During this time, he was thinking about transitioning their business into a commercial cleaning business. Back then they had 3 or 4 employees but weren’t being very mindful of their profitability. They would either have too much work and not enough employees or vice versa. They kept getting sucked back into the field. Ashley stresses that they regret not getting into Elite program back when Avery was first on podcast, however they’re so grateful for the systems and process they now have in place. If they would have had the GMCC team back in 2012, it would have been so different because now they have SYSTEMS for getting more employees AND customers.

Mike: “What made you wait at the beginning from joining the Elite Program?”

Avery explains that all of the material in the program was available at the time to him. However, he compares having the Clean Profit Method like giving a loaded gun to a child. He didn’t know what to do with all the information. 95% of it was totally different to what he and Ashely were doing at the time in their business. Avery picked and chose what he wanted to go through, but that didn’t really work because they were avoiding steps in the process. When they came back around, he’d been listening to the podcast more, but they weren’t sure if they would stay in the cleaning industry.  To sum it up – they weren’t ready mentally. Ashley adds that she had just given birth to their second daughter. She had mentally checked out of the business end of things to spend time with their newborn while Avery took over the business goals.

Mike: “How did you solve your customer and employee problems?”

Avery goes into depth explaining that he thinks that the answers that a lot of cleaning business owners are looking for are often the wrong things. It’s really about their WHY and CORE VALUES. This is what changed it for them with their client and employee attraction systems. They can CONTROL the amount of either at any time. Avery explains it’s like turning up and down volume knobs. He also refers to the podcast in which Mike explains what he’d do if he had to start a cleaning business from scratch as a great reference to getting really honed in on your WHY.